Persian Tabriz rugs and Persian Tabriz carpets woven in and around the area of Tabriz, Iran. Tabriz is the fifth largest city in Iran, and the capital of East Azerbaijan Province. Located in the Northwest region of Iran between the Eynali and Sahand mountains, the city of Tabriz remains in a lower lying area of the fertile shores of the Aji and Ghuri rivers. The city of Tabriz itself is rich in history, and despite its location in an earthquake prone area, several historic monuments dating as far back as the Safavid period still remain.

The area in and around the city of Tabriz have produced among the finest examples of Persian rug weaving known through time. Carpets of Tabrizi origin Tabriz carpets are also known for very elaborate woven renditions of elaborate Garden scenes. There are some archeologists who even suggest that the Garden of Eden must have been located in the city of Tabriz.

Fine hand knotted rugs made in the city of Tabriz, Iran, are among the most renown Persian rugs.

Amongst notable names producing Tabriz carpets in the 20th century were firms and workshops of PETAG (Persische Teppich-Gesellschaft with woven çintimani symbol), Eskandani (signature), Tabatabaie (signature) and Dilmaghani through the latter (single, double signature, and or trademark crown). 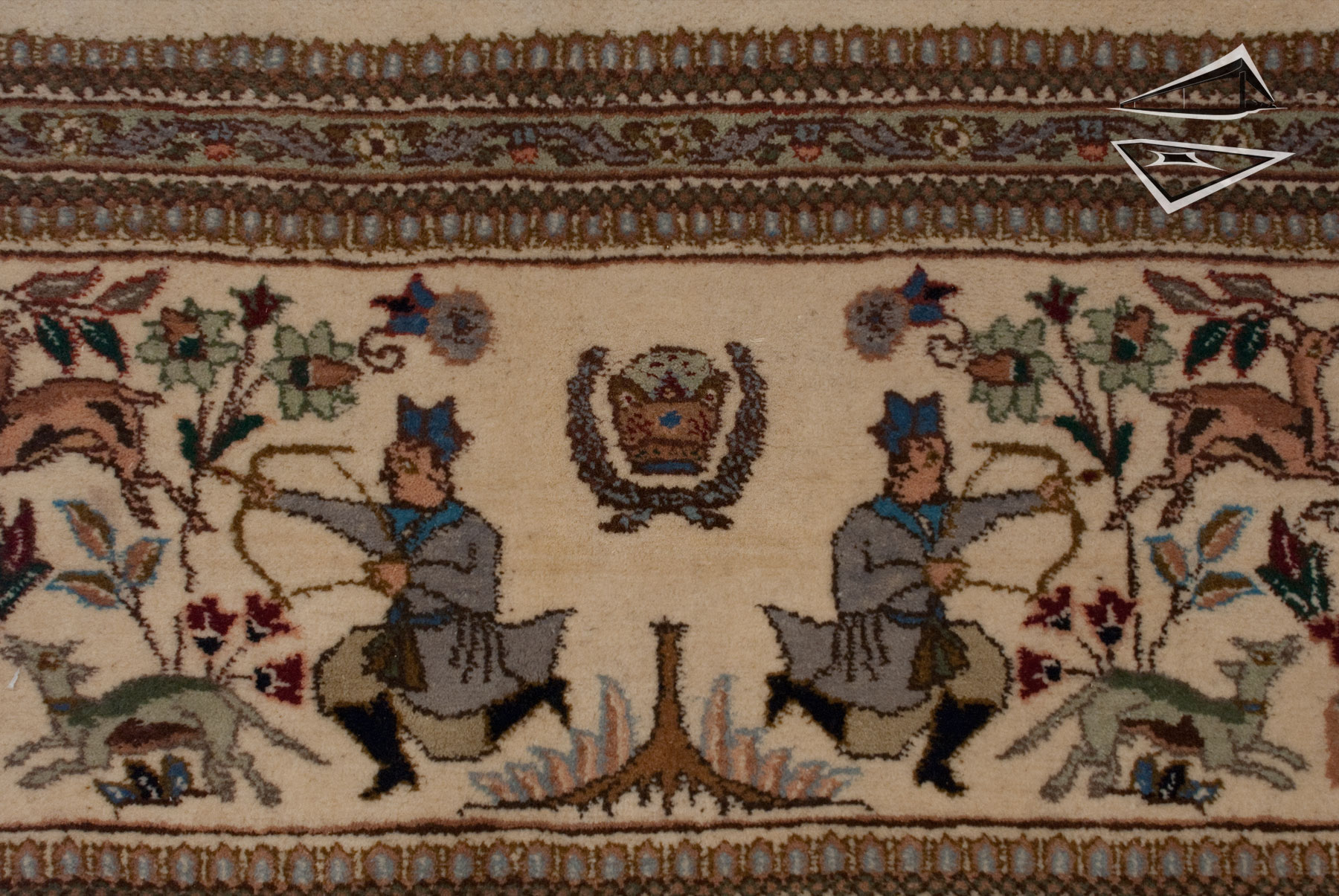 Many of the vintage Tabriz rugs and mid-century semi-antique Tabriz carpets herein are woven by the latter two manufacturers in similar spirit to antique Tabriz rugs of yesteryear with several notable differences aside from age. Pile thickness was greater in mid-century examples: As opposed thinner antique carpets, mid century examples are typically 3/8ths of an inch thick. Colors of mid century pieces were more vast in the lighter tones, encompassing a plethora of colors often more diverse than the traditional rusty orange shade antique Tabriz carpets were known for. Motifs of newer Tabriz rugs would include more animals such as deer, birds, and even hunting scenes of horsemen with drawn arrows. Similar to the antique Tabriz carpets of yesteryear, better examples of mid century Tabriz rugs were typically in the 35 RAJ quality and higher, with small sizes up to dozar from the Tabatabaie workshops measuring up to 50 RAJ, 70 RAJ and more +/-.

Antique Silk Tabriz Rugs: Among the most coveted of fine Persian rugs woven in the 19th century include those of unusually high artistic merit. Examples exhibiting rare colors and reverence to renown 16th Century Safavid courts weaving such is the example to the left are among the finest. This extremely unusual all-silk Tabriz is of palace size proportion is among the finest examples attesting to the most distinguished of Persian rug weaving. Unparalleled detail throughout, with a rare celedon green field and unique carmine red top color make this imaginative, yet highly accurate interpretation of a classic 16th century Safavid weaving a true masterpiece, likely of very special order.

Haji Jalili Tabriz: Among other referenced types of 19th century Persian Tabriz weavings include those attributed as “Haji Jalili Tabriz” carpets. ‘Haji’ meaning one who completed journey to Mecca, Jalili being a last name, and Tabriz being the origin of the carpet). Carpets of such criteria are considered workshop examples, although no specific Jalili workshop is documented and signature identifiers are not necessarily present in such carpets. Examples often attributed as ‘Haji Jalili Tabriz’ rugs often follow specific criteria. They are of a specific era and age, from the area of Tabriz, of a tight weave, thin pile, and high level of detail. Fine examples with still resilient wool and proper care will endure many more decades. Regardless of the beauty, harmony and craftsmanship behind many of such carpets, there are individuals who doubt ‘Jalili rugs’ actually representing the feat of one workshop or weaving firm.

Many of such carpets have been washed over the years, which is why purists will often have favoritism toward examples exhibiting characteristics closer to the rug above, and detail below. 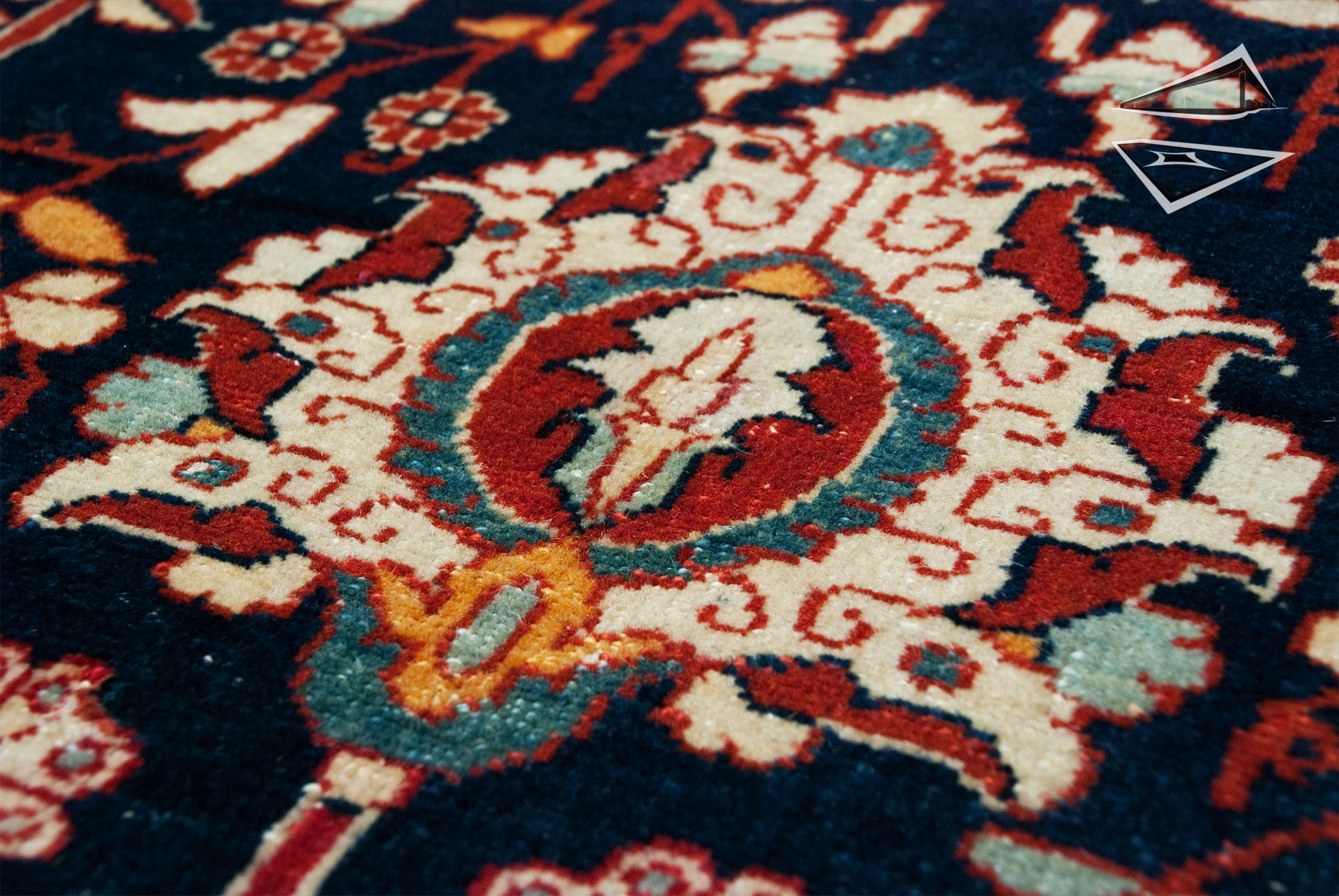 For the best of antique Tabriz rugs, find what your eye is naturally drawn to aesthetically. Often the colors, designs and at times textures which speak well will be those carpets with a higher level of color clarity, delineated but subtle tone-on-tone weaving, color-to-color contrast, detail & condition. For purist collectors, most notably, a carpet with present condition as close to originally intended by designer & weaver will be of significance. In the adjacent photograph, note the high level of detail, even pile, strong color saturation, and overall harmony. This example above is among few carpets of its type to evade a color softening wash.Typically such practices would tone-down brilliant shades of reds to rust, and would tint ivory to an artificial golden patina.